I wanted to share some of the stories behind my images and tell you about the inspiration behind them, but first I thought I’d talk about my inspirations in general. In the next blog post (part 2), I’ll pick some of my older images and talk about how and why I did what I did.
(if there’s a specific image you wanna know more about, let me know!)

Music – I listen to so many different genres and I almost never know why I like the songs I like. Sometimes it’s because of the artist. Like Amy Lee’s new album, Aftermath. I usually don’t like electronic music or anything with a repetitive beat, but I absolutely love this album. Of course I like the piano/cello songs the most though. I think I love it because I grew up listening to Evanescence and their music influenced me a lot.
You know how sometimes when you listen to a song you start making up your own music video for it in your head, with you in it of course? (we’ve all done it, it’s okay). I do the same thing but with pictures. Sometimes I imagine a picture based on the song while listening to it, and sometimes I just write down some of the lyrics so that I can go back to it and try to create something based on it (I have SO many written down that I haven’t done yet, like this one line from a song called Hunted by Device: “it isn’t homicide when you know they’re already dead“, and from a song called Bittersweet by The Rasmus feat. HIM & Apocalyptica: “queen of my silent suffocation“). It’s always tiny stuff like that that helps me come up with stories for my pictures.

This picture was inspired by a song called Paradise by Within Temptation.

what about us, isn’t it enough
no we’re not in paradise
this is who we are, this is what we’ve got
no it’s not our paradise, but it’s all we want and it’s all that we’re fighting for
though it’s not paradise
you and us, or I and them
there comes a time to take a stand
the wheel is watching all
it keeps on burning

When I made this picture, the story I had in mind was about the loss of identity, of people being carbon copies of each other, and of being abandoned and forgotten. To be honest, when I did this I wasn’t trying to make any kind of political statement, but a lot of people told me that that’s what it seems to be.

There’s a folk metal band called Eluveitie that I’m absolutely in LOVE with. And that also takes me to another thing that inspires me:
Different eras – there are so many that I love but I think what stands out is the medieval times/middle ages. I love the way they dressed and I’ve always wanted to do a shoot inspired by that with all those gorgeous dresses. I’m thinking of stuff like Merlin (the show) and Lord of The Rings.

Then there’s the Victorian fashion – I love it so much! But whenever I think Victorian, it’s always this gothic victorian meets haunted circus/carnival and maybe even burlesque.

TV shows – Once Upon A Time. Enough said. My favorite scenes in that show are the ones in the Enchanted Forest cause that’s when all the characters are wearing beautiful dresses and costumes.

So you might be wondering how these are my inspirations when I don’t really incorporate these kinds of outfits into my work. One of the reasons is that it is so incredibly hard to find this stuff here in Dubai, and there’s so much stuff online – but it’s ridiculously expensive. I try not to spend too much on shoots and just keep things simple. I know that once I have a bigger budget for shoots I’ll be going for a bigger variety of costumes or dresses, but for now I work with what I’ve got. There’s also the fact that I don’t want my work to be a replica of something I’ve seen, I still want it to be a part of me. So I find everything I mentioned above inspiring because it’s a different time, a different world – a beautiful world.

When I first heard this song, I had no idea that it could be about the Salem Witch Trials. I remember playing this video in one of my classes in university and discussing the lyrics and how in the music video it’s about the trials. I’ve always found that fascinating, but more on my obsession with magic later.

When I was around 12 or 13, I was obsessed with a swedish pop band called Play. A while back, I had my iTunes on shuffle and this song came up, I forgot I even had it! So I looked up the band to see if they still exist and started watching their music videos. This one was and still is one of my favorites. NO SHAME. I still love old pop music. What I find most inspiring about this video is the location (and the dresses)! I especially love the scene with the huge cage. Kinda reminded me of one of Lara Jade’s old pictures: 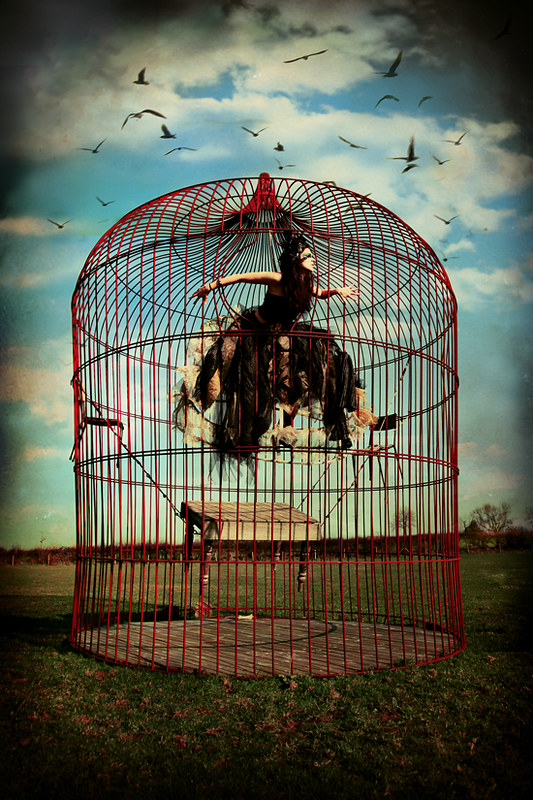 This performance is absolutely incredible. The whole thing is up on youtube somewhere, it’s about an hour long. Within Temptation’s always been one of my favorite bands, I was so excited when I saw that they did a performance with an orchestra (I looove orchestras). Music aside, Sharon’s outfits are to die for! And the part with the angels (I think that’s what they’re supposed to be) is just amazing.

Books – I loooove reading. Almost as much as I love photography. I read poetry and fiction mostly, but every now and then I like to read non-fiction, memoirs, psychology and philosophy books, and self-help books. A few months back, I read a book called Balefire by Cate Tiernan (it’s actually a trilogy combined into one book). I loved it so much I decided to create an image based on one of the characters in the book: 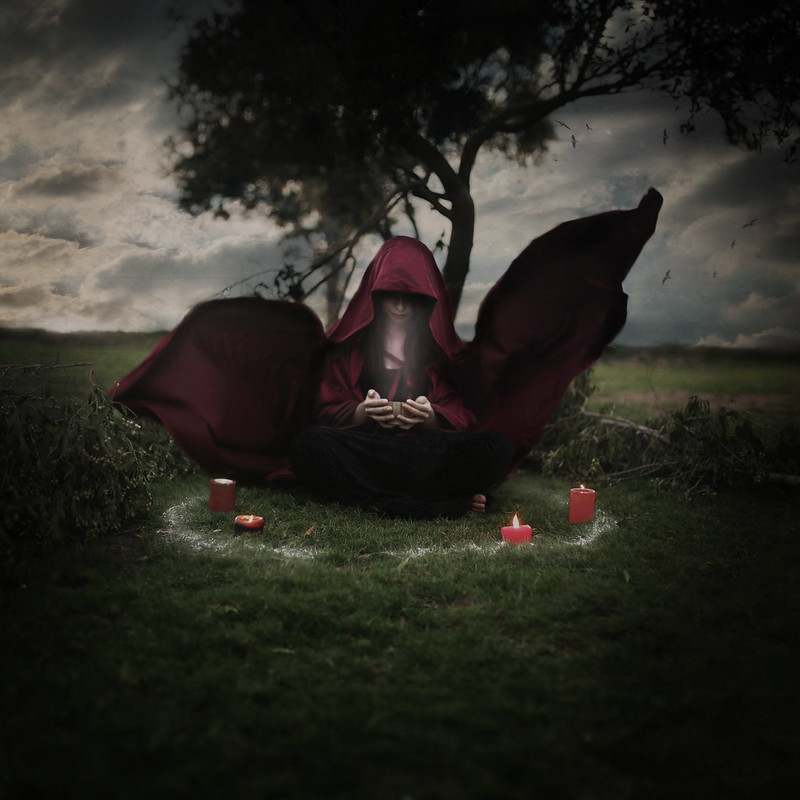 Something Wicked This Way Comes

Magic – I feel a little silly adding this to the list, but it’s true. I find magic fascinating. I’m not talking about Harry Potter magic (even though I love Harry Potter). I’m talking about Wicca. Most of what I know about Wicca is from Cate Tiernan’s book – growing up, I read (and re-read) her Sweep series, and also LJ Smith’s The Secret Circle. What I love about it is that it seems like such a simple and beautiful way of living; being in tune with nature and see beauty in everything.

If there’s one thing I’ve learned over the past year, it’s that inspiration is everywhere. You just have to look for it. Sometimes it’ll come to you – you’ll wake up and this awesome idea will hit you and it would be amazing and you’d be so excited to do it, but most times you have to train yourself to see inspiration in everything. That’s another thing I learned from Brooke Shaden.

What inspires me the most on a daily basis are feelings and emotions. I’m a sensitive person (sometimes too sensitive) and it’s what enables me to do what I do. I take bad experiences (and good ones) and turn them into pictures. And sometimes, I listen to other people’s stories or read stuff online and turn that into a picture.
Inspiration is everywhere.